Last weekend, Justin and I, along with a group of fellow teachers from our school, had the honor of visiting Wat Ban Rai, a temple located about an hour outside Korat. As one of the only temples shaped with an elephant's head and a body of a turtle in Thailand, we were truly lucky to experience this one-of-a-kind place in person.

A Bit of Background on the Temple

Originally, Wat Ban Rai was a small monastery where very few Buddhists claimed worship. It wasn't until the renowned monk, Luang Phor Khun came along and decided to rebuild the temple into what it is today. He collected funds from the local villagers and spent the remaining part of his life rebuilding the temple, along with several schools and hospitals in the Nakhon Ratchasima province. Luang Phor Khun met and blessed visitors to Wat Ban Rai until his death in 2015. Now, his golden statue sits atop the elephant temple he built, protecting everyone who steps inside.

Luang Por Khun poured his heart and soul into the rehibiliation of this temple... so much that, in fact, Wat Ban Rai is Asia’s largest ceramic mosaic shrine, adorning more than 20 million pieces of mosaic. This temple sparkles and shines for miles.

When we first walked up to the temple, we were in shock. We had seen pictures on the internet before coming, but in person, the sheer immensity and size was shocking. Standing at 42 meters high, this four-story temple, with its' 520-ton ceramic elephant head on the body of a turtle, immediately took our breath away.

The temple is situated in the middle of a pond, guarded by two 19-headed nagas (serpents). We walked up a long bridge to get to the entrance, where we took our shoes off and admired the paintings and statues surrounding the temple.

Around the perimeter of the temple are several magnificent statues resembling sacred animals in Buddhism: a horse, a tiger, a bull, a turtle, and a crocodile. They are all incredibly detailed and colorful.

When we walked inside, we were greeted by six floor-to-ceiling paintings depicting the life of the Buddha from birth to enlightenment. In the center of the room sat a golden leaf-shaped structure, where visitors could leave offerings and donations. 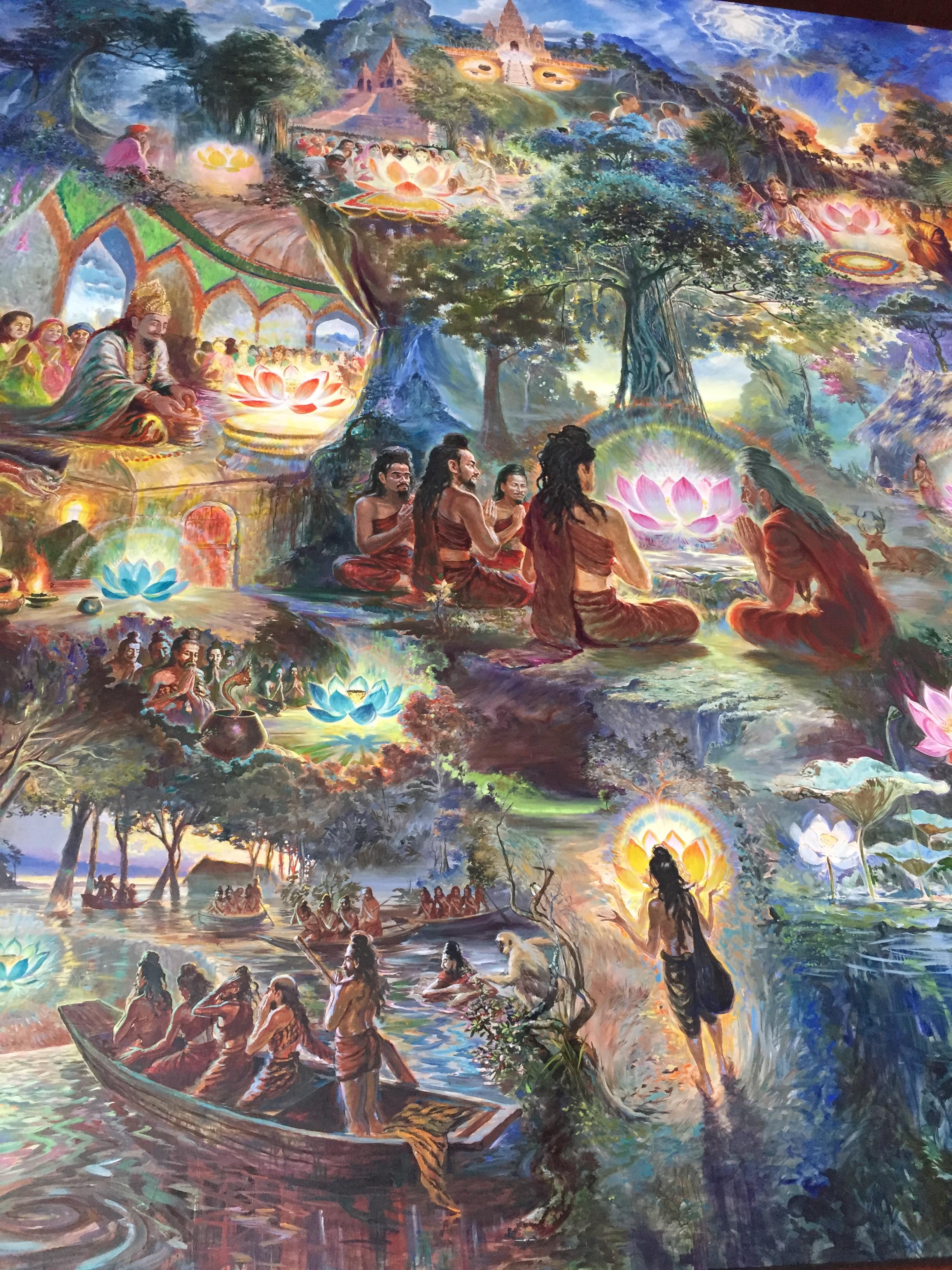 We took the ramp down to the basement to start, and then worked our way up. In the dimly lit basement, we learned about the dieties of the underwater world. Our eyes were immediately drawn to the colorful balls hanging from the ceiling in nets, giving an "underwater" feel to the room and representing colors of precious stones in Buddhism. 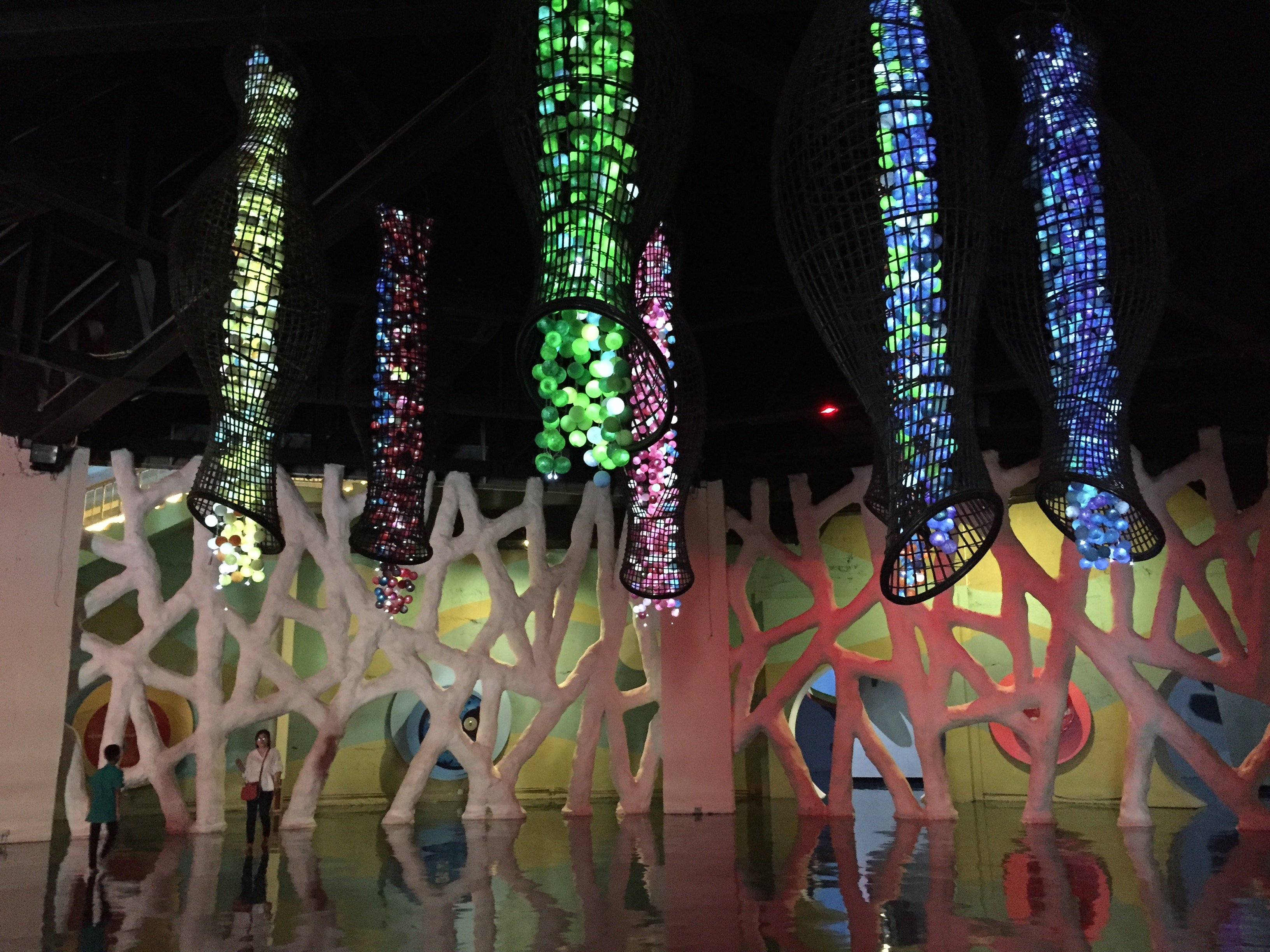 Surrounding the perimeter of the downstairs were the sacred objects of the underwater world and their significance:

At the top floor of the temple, we basked in the breeze of the open air patio, as well as the views of the town below. Joining us were two golden statues: one 7-meters tall of the Buddha, and one 5-meters tall of Luang Phor Khun. 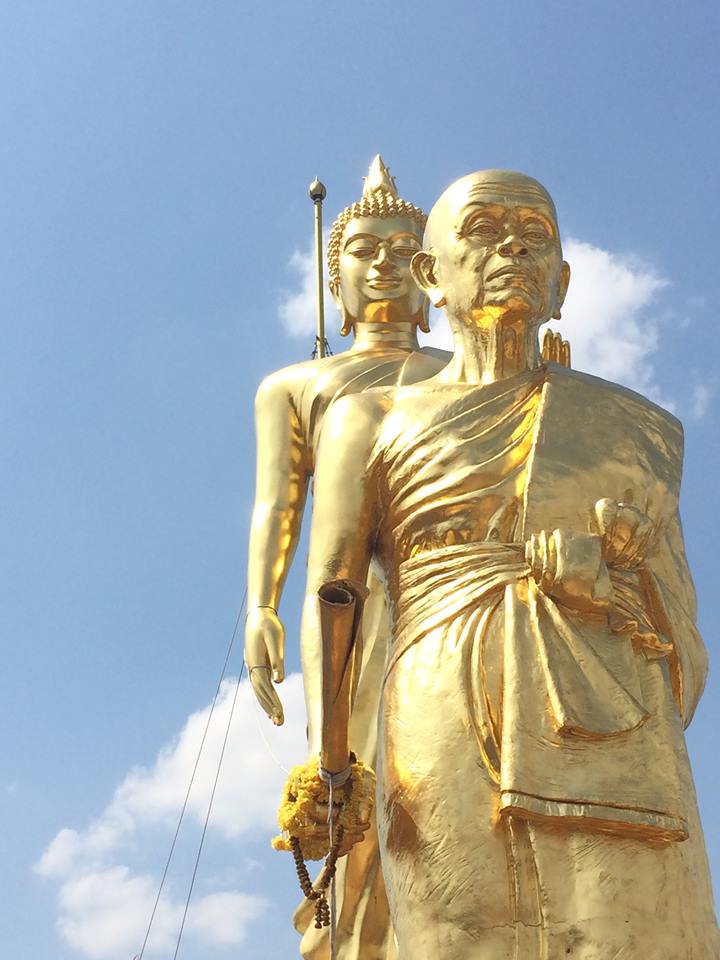 After paying our respects, we made our way back down to the main floor of the temple. By that time, it was mid-afternoon, the sun was high in the sky, and it was hot (mid to high-90's with high humidity!). We took a few final snapshots and made our way back to the parking lot.

On our way, we decided to make a donation to the temple in exchange for a small gift. The only catch was that we had to take a long poll, hook on to a red pouch tied to the ceiling, and pull it down. Inside, we'd find a wrapped gift. We each took a turn, excited to see what surprise we'd find inside.

Most of us found small pendants similar to the ones you see pictured above, but they were all different. Justin was lucky enough to find a small red prayer flag along with his pendant. Sure, it may have been a little cheesy, but it was a lovely way to end the day and pay tribute to such a unique temple in our province.

If you ever make your way to Nakhon Ratchasima, Wat Ban Rai is an absolute must-see. If, instead, you'd like to see drone footage of the temple from the comfort of your home, don't miss this awesome video, shot by one of our friends and What's On Korat founder, Charlie Crowson: