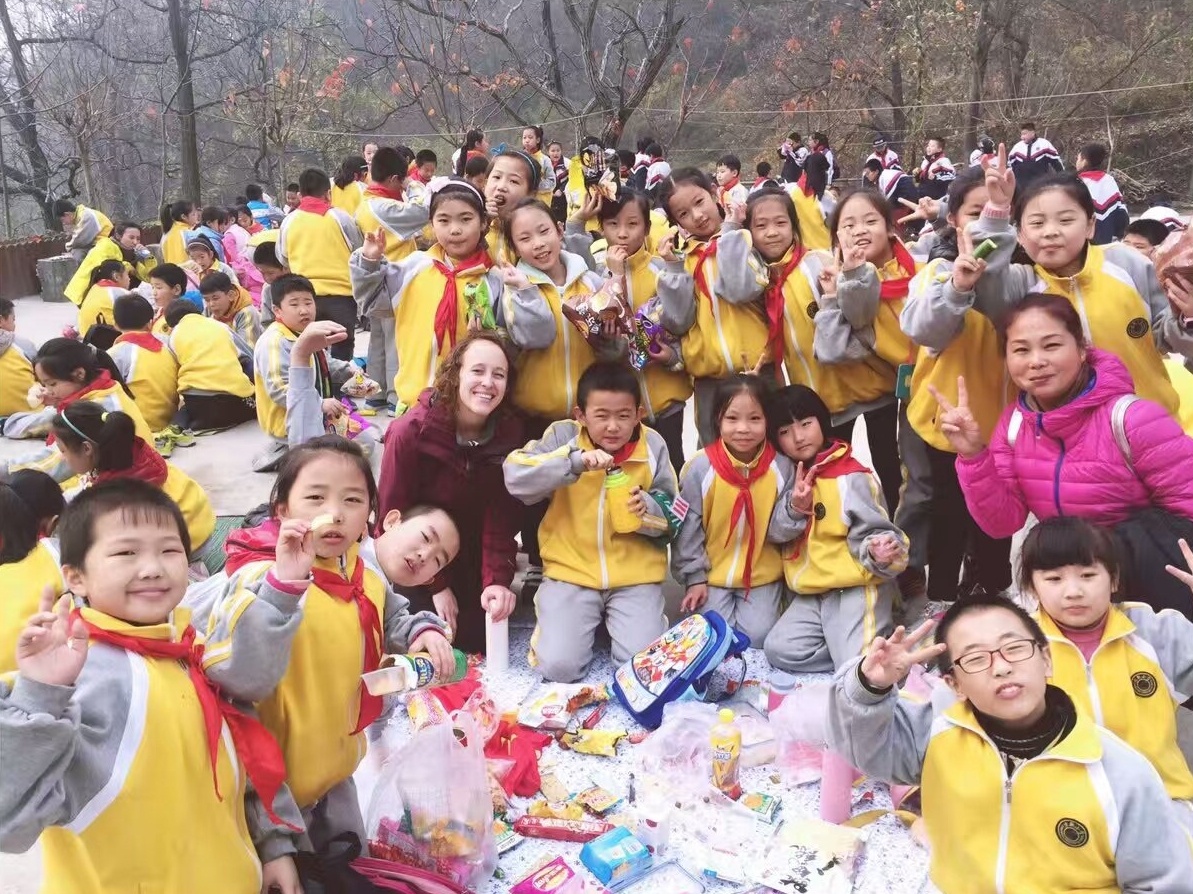 If you went to school in New England, you can probably remember a few of your school trips. For me, growing up near Portland and Boston allowed for several memorable school trips, usually of some historical significance— to the Wadsworth-Longfellow House, Portland Headlight, and Faneuil Hall, just to name a few. Regardless of where you were going, the anticipation and excitement you felt the night before a school trip was enough to keep you up all night. The extra time you took to pack your favorite snacks, the thought of sitting with your best friends on the bus, the pure joy of knowing you didn’t have to be in a classroom all day— we all lived for trips like these.

Last week, I experienced my first school trip as a teacher... in China. And boy, was it an adventure. Because our school is so massive (with about 2,400 students) we took two different groups over the course of two days. Justin chaperoned grades 2, 5, and 6 on Wednesday, while I chaperoned grades 3 and 4 on Thursday. Grade 1 sat out for this one.

Thursday morning, I met the students at the school gate at 8:30 sharp and helped move them on to the busses. Now, these weren’t your ordinary yellow school busses. These were top-notch coach-style busses, complete with comfortable leather seats and bathrooms. The hour and half ride outside the city would be a breeze in these, I thought...

I was soon proved horribly wrong. We hadn’t even made it five minutes outside the city when two students started getting car sick. They moved up to the front— one across the aisle from me, the other in the seat in front of me. Midway through the ride, another student vomited all over the seat in front of him. I tried ignoring the smell and, instead, focused on the road ahead, but even that was a challenge. Our bus driver held no mercy; he weaved and honked and tore around cars like he was driving a mustang rather than a bus of thirty people.

Despite the car sickness and knuckle whitening driving, we made it to our destination in one piece: a resort in the mountains. The students split up by class and went their separate ways to different activities.

My class started atop one of the mountain peaks at a ropes course. The students strapped into a harness (helmet-less) and climbed up a 30-foot metal beam using small pegs to hoist themselves up. Once they reached the top, they stood either on a wooden beam and tried to jump to the other side, or hopped across a horizontal tire-ladder. The students loved it, but I found myself holding my breath every time a student climbed to the top of the rickety structure. Everyone made it out safely, though, even with a minor fall the day before.

After all the students had a try at the course, they walked back down the hill to their next activity, lead by a man in a military uniform. He commanded them to line up behind one another, forming a tight-knit square. He then taught the students various drills: marching in place, walking back and forth, and punching. I tried not to think about how they all looked like a mini child army while I watched their synchronized movements and chants.

We then took a break for lunch. The students packed snacks and visited several street carts on the mountain to buy drinks and packaged noodles. For the teachers, the staff prepared us two styrofoam containers: one of rice and the other filled with a tomato garlic sauce over a meat, tofu, and vegetable medley. A pretty swanky meal for a school trip, I must say. I sat outside with the students, enjoying the gentle breeze and (slightly) fresher mountain air. I can’t even remember how many students came up to me, offering me their bag of chips, an apple, or a wrapped dessert. The sincere generosity of my students always strikes me— many of them have so little, but are willing to give so much just to put a smile on your face.

With our bellies full, we headed further down the hill for yet another “team building” challenge. The students were given a square wooden platform scattered with holes. In small groups, they had to work together to move a golf ball to each corner. I loved watching the students work with one another and scream every time they let the golf ball fall through one of the holes on the board.

The next activity was what the students had all been waiting for: laser tag. The students split up into two teams and “suited up” in their colored vests and helmets. They all carried plastic assault-style rifle guns to a nearby grassy area and began “fighting” one another. This wasn’t a standard laser tag course like we have back in the States with barriers and blocks to hide behind; this was just an open field with a few small trees and bushes. The students (and teachers) still had a blast, especially with the goofy photo ops. 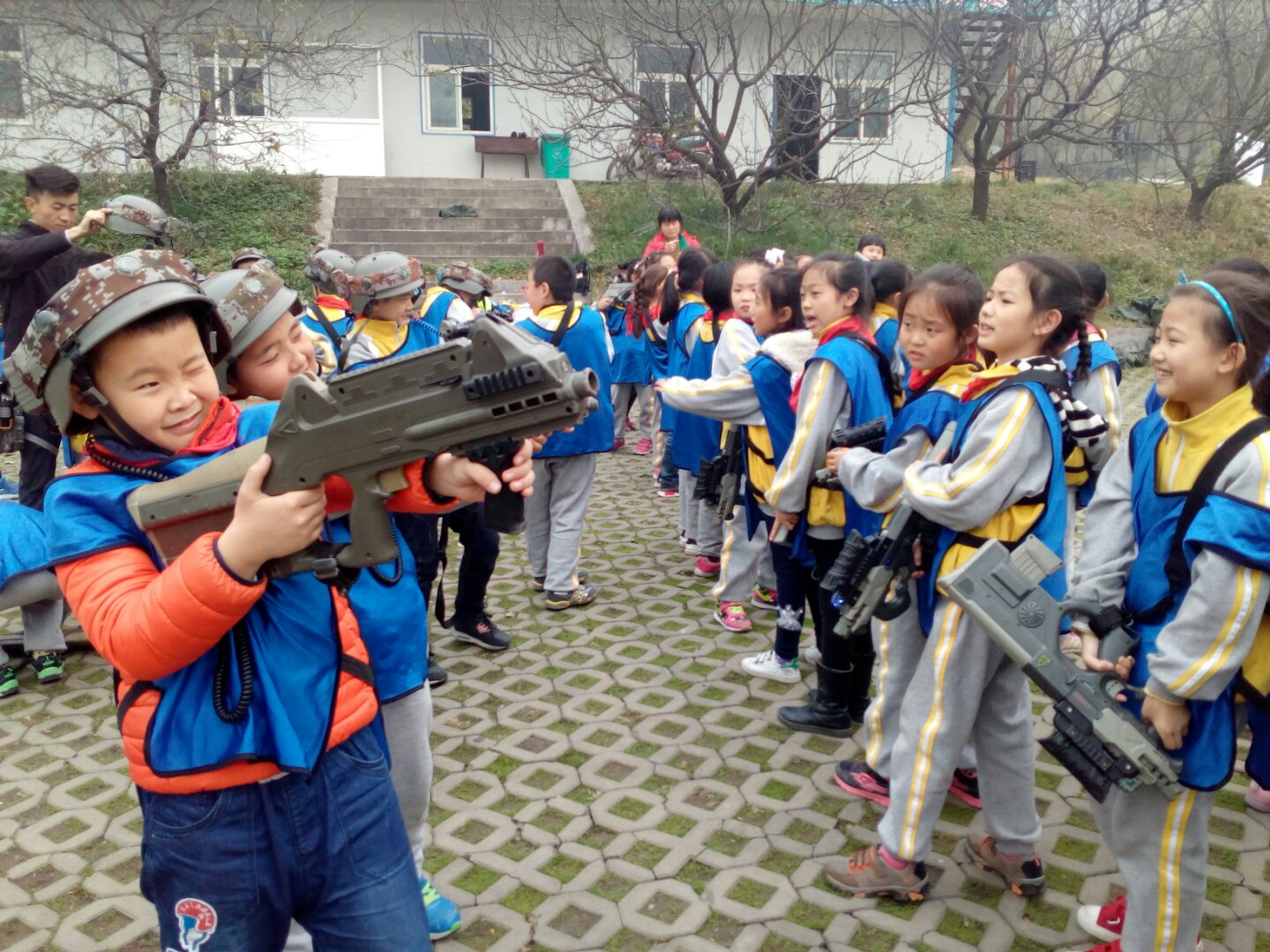 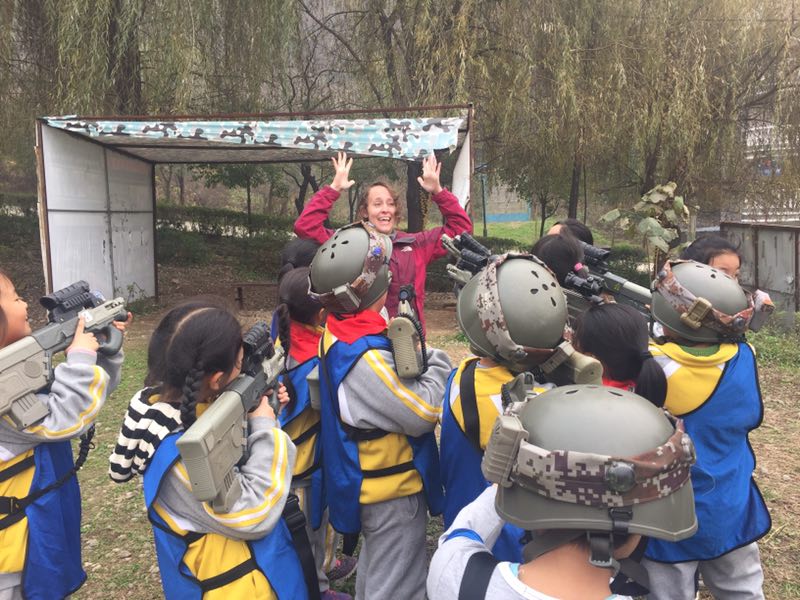 Afterward, we walked further down the mountain to an open area where two activities were set up. My class split into two groups: boys and girls. The girls started at the slingshot. They placed bouncy balls into a slingshot, while a small group of girls stood 25 feet out, waiting to catch the ball in a small bucket. Across the way, the boys raced each other on bouncy caterpillars. They hoisted themselves over the toys with one leg on either side and both hands on the handles. When the whistle blew, they would shimmy right-left-right-left with their team as fast as they could, trying to beat the other “caterpillars.”

We ended the day in a similar military fashion with a fire-lit ceremony, complete with anthem music and one last round of synchronized marching. The teachers took their final snapshots and rounded up their students back on the busses. Luckily, they were too exhausted to get car sick this time. 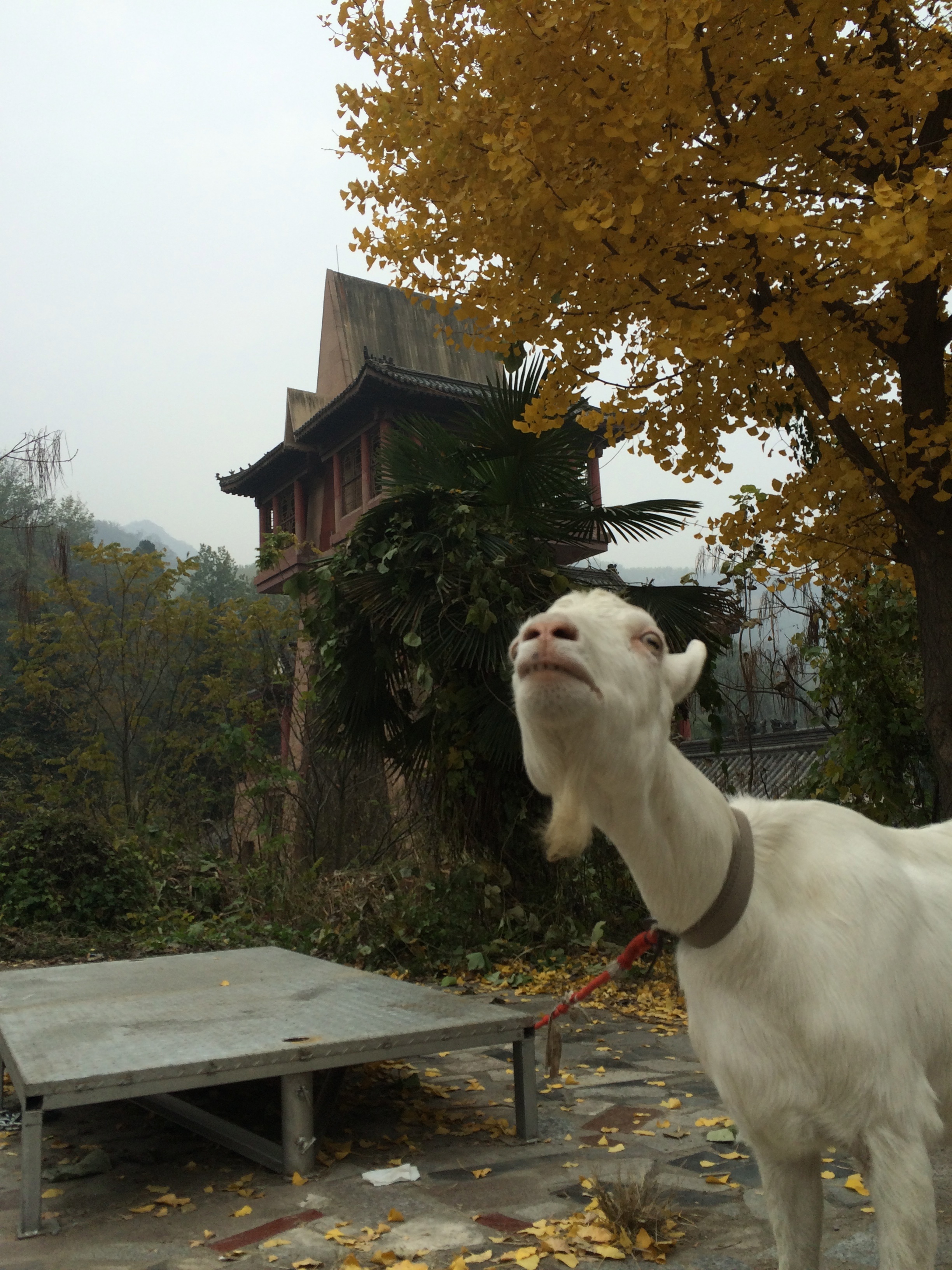 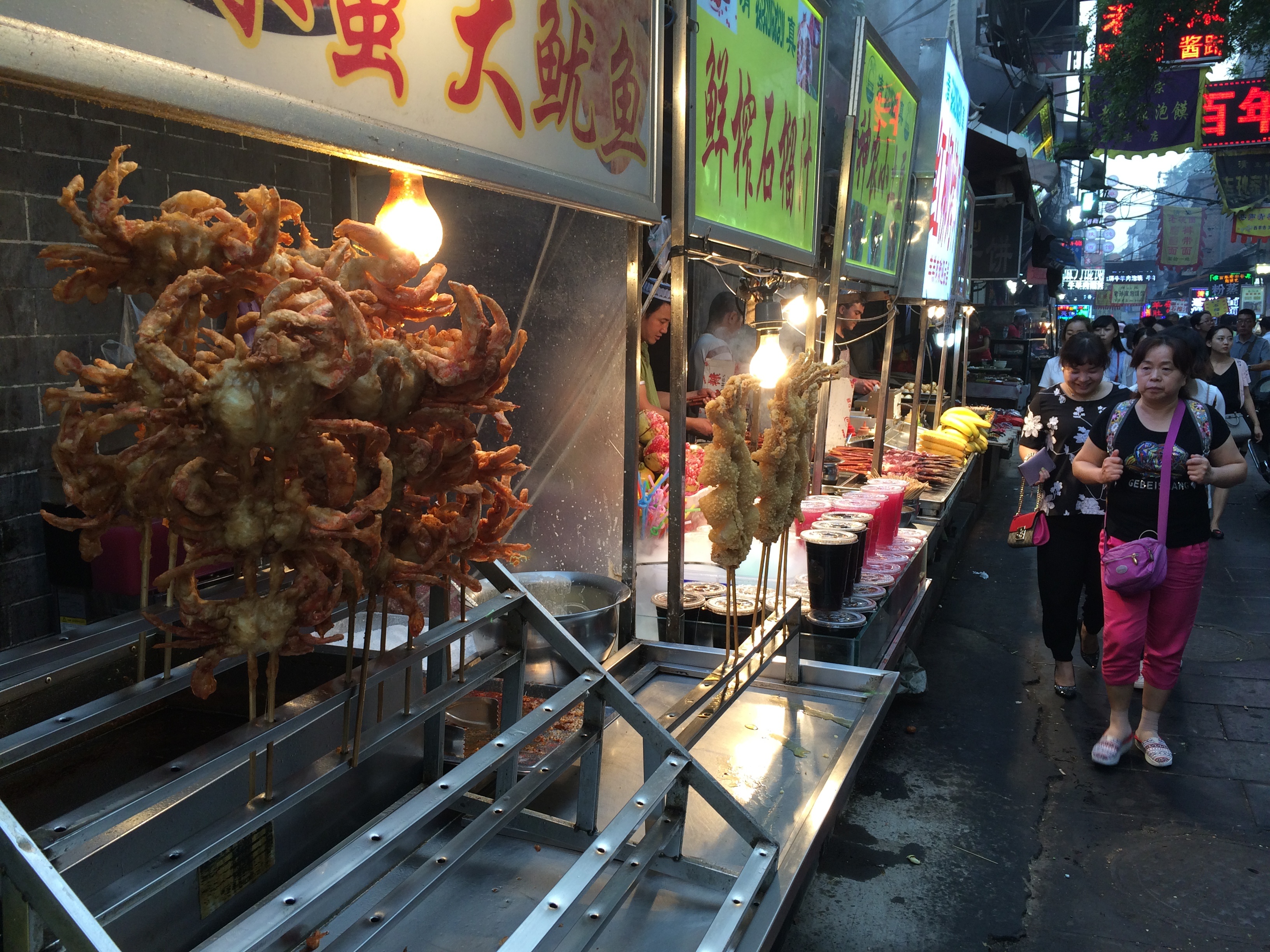 Crossfit For Your Nose

On the bus in China, you get to know people on a chemical level. The sweat is pervasive and the odd mixture of cologne (and lack of) makes for a veritable pheromone...