Well, maybe not "Death Mountain," but Mount Hua (Huashan) was once considered one of the most dangerous hikes in the world. We wanted to see what the hype was about and visit it for ourselves. After all, not many people can say they've hiked one of the Five Sacred Mountains of China.

Located just 70 miles outside of Xi'an in Huayin City, Mount Hua is truly a magnificent place. With multiple ways to travel there, we opted for the "luxury" experience on the speed train. And I'm beyond glad we did.

We simply purchased our tickets on C-Trip (80 yuan per person or $13 USD), took the metro to the (beautiful and easy to navigate) northern train station in Xi'an, and hopped on the train. The train itself was spacious, clean, and fast— we went the full 70 mile journey in about 30 minutes. I must say, China's speed trains are quite impressive; I would travel on them anywhere.

Huayin City is much less impressive. It felt like a smaller version of Xi'an: equally as smoggy, but less congested and commercialized. As soon as we walked out of the train station we were greeted by Mount Hua's towering, snow-capped peaks in the distance. We kept our eyes glued to the mountain on the entire drive from the train station to our hotel downtown. Even amidst the smog, the mountain peaks were absolutely breathtaking. 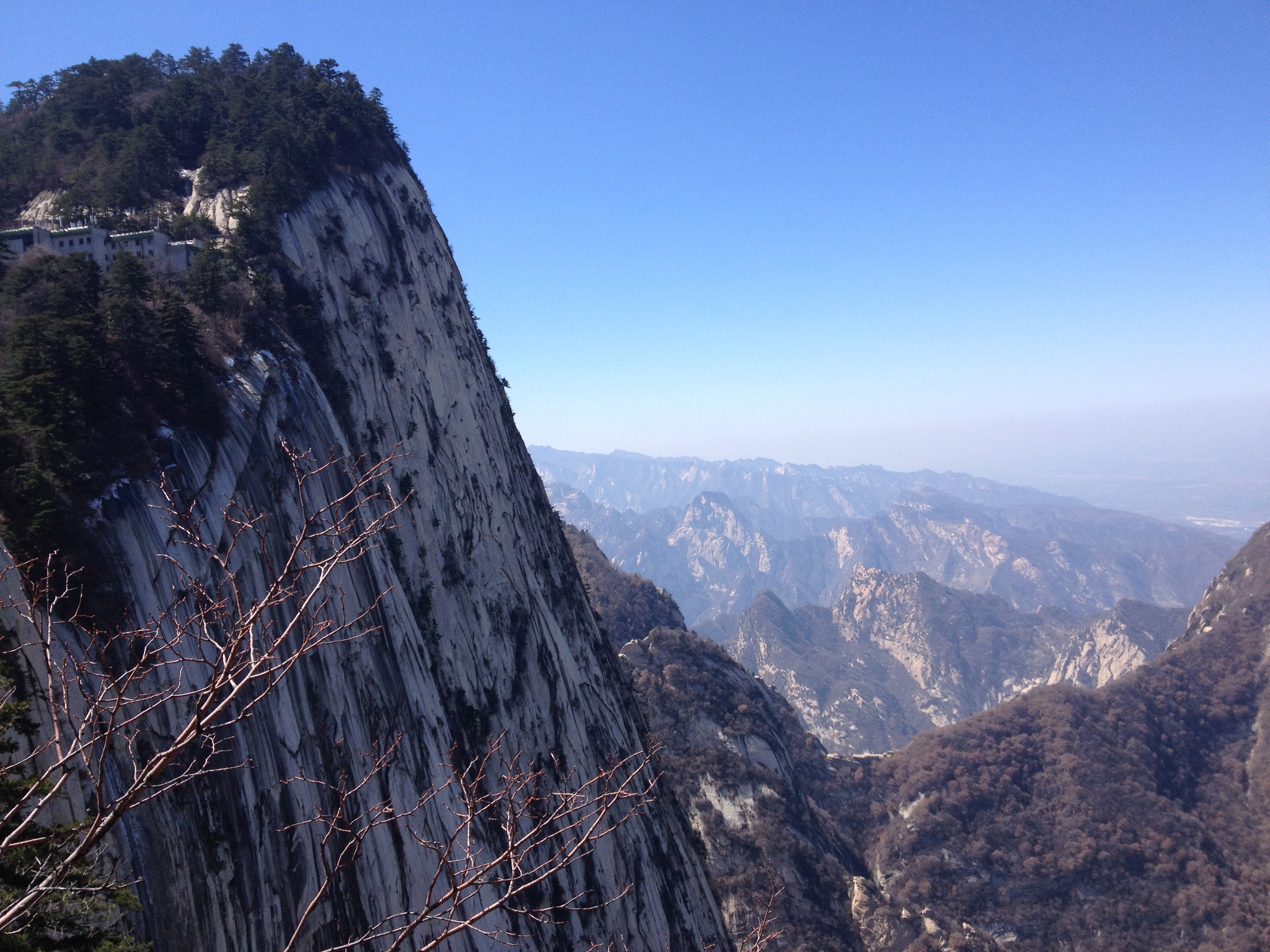 Our accommodations, Huashan Fengguang Inn, were... lacking. Our neighbors were incredibly loud. And by neighbors, I mean the sparrows that nested outside our door and pooped in our entryway. The place wasn't the cleanest, the staff was usually nowhere to be found, and we even lost water at one point. After a full day spent hiking on the mountain, we chalked it up to China and were just glad to have a bed to rest our tired legs for the night.

When we arrived on Friday afternoon, we wandered around the downtown area of Huayin. Like most Chinese towns, it was full of small restaurants, convenience stores, and street vendors selling toys and snacks. Because of the mountain attraction nearby, there were also many shops selling hiking gear— backpacks, shoes, hats, coats, gloves... you name it. We called it an early night on Friday after splitting a plate of fried rice, pàomó, and ròujīamó.

Saturday morning, we woke up early and grabbed a taxi to Mount Hua's welcome center. There, we purchased our entrance ticket to the mountain for a hefty 180 yuan per person ($29 USD). From here, we were left to decide how we wanted to get to the top of Mount Hua.

There are many different ways to ascend the mountain. Brave and super fit folks can climb the millions of cement stairs to the northeast basin of the North peak. Or, semi-lazy (yet still brave of heart) travelers can opt for the cable car to either the North or West Peak. We'd recommend taking the cable car to the West peak. Whatever method you decide, keep in mind that trekking up the mountain can take upwards of 4-6 hours, while there's still quite a bit of walking to do if you hope to travel between the different peaks.

We wanted to save our energy for the climbs between peaks, so we decided to take the cable car. At the welcome center, we purchased a 40 yuan bus ticket ($6 USD) to take us to the West peak cable car center. The bus ride was about 40 minutes— half the trip was through the town, while the other half was spent winding up a bit of the mountain. 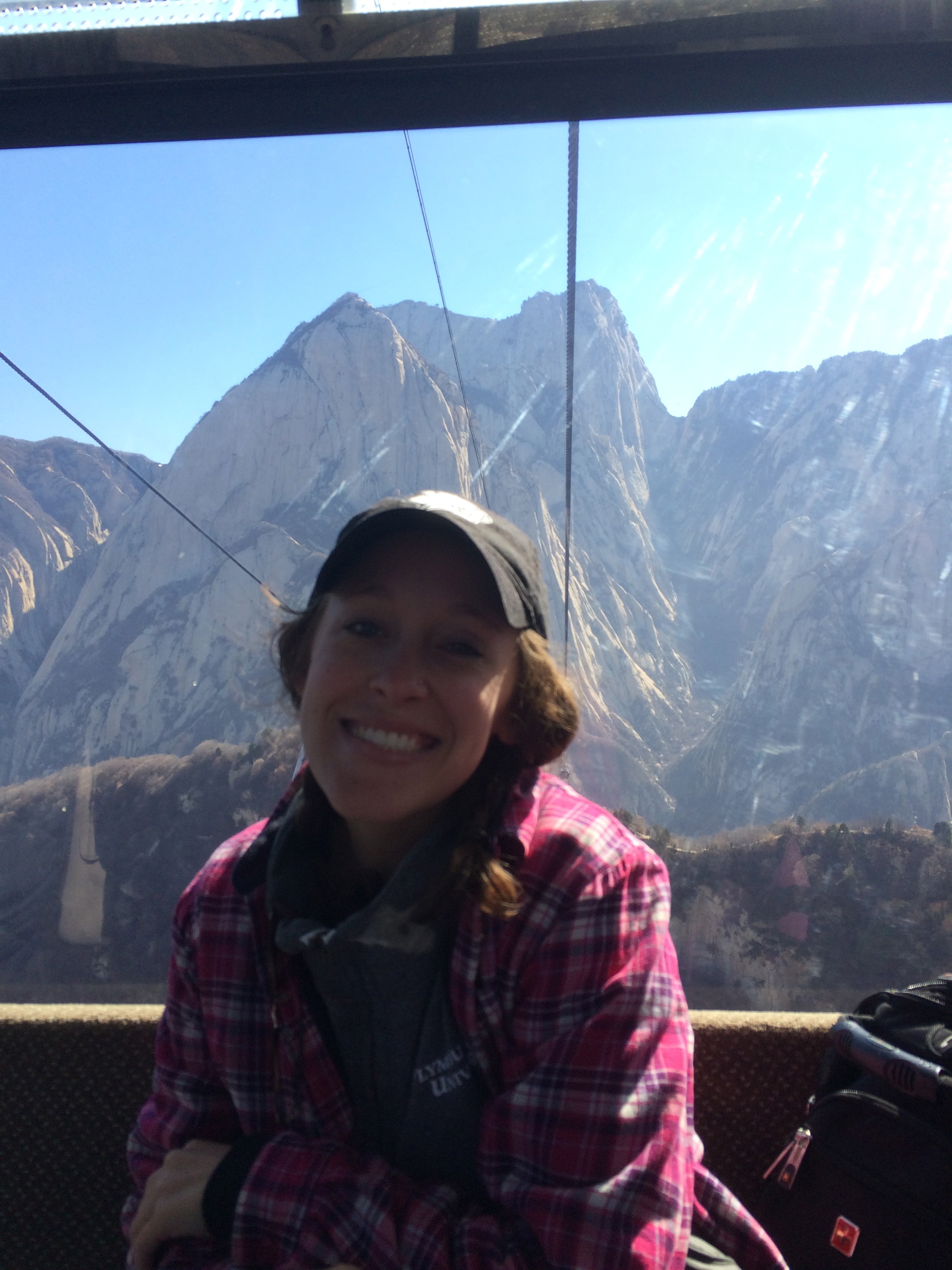 At the West cable car station, we had to purchase another ticket of 140 yuan per person ($20 USD) to ride the car one-way. Despite the high prices, the lines were short and before we knew it, we were stepping into our cable car with a Chinese family (pictured). The ride to the top of West peak was stunning... and slightly terrifying. We made it in one piece, though, and were happy to be above the smog and out in the fresh air.

Right away, we began our trek to the South peak, also known as the "Landing Wild Geese Peak" for the wild geese that land on the peak from their journey returning south. The South peak stands at 7,087 feet: the highest of all Mount Hua's peaks and of all the Five Sacred Mountains of China. We visited the Taoist temple at the top of the peak (pictured), which is considered to be the host temple of the mountain's deity. Near the temple is the infamous "plank road," where the truly adventurous can walk across a one-foot wide plank suspended 7,087 feet on a vertical cliff side. We opted out of that tourist trap... I'd like to keep writing posts. 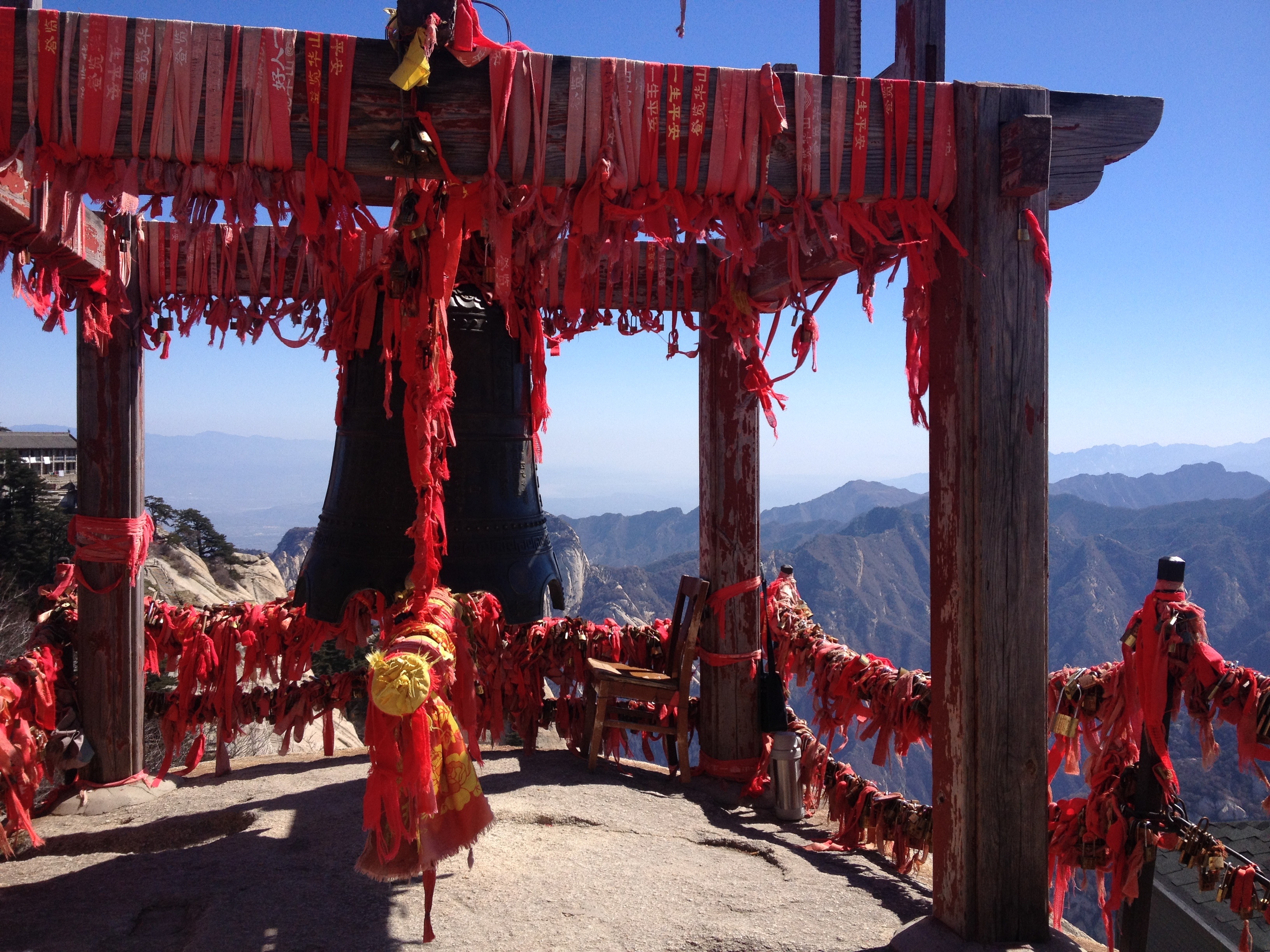 After spending quite a bit of time enjoying the overlook at South peak, we ventured to the West Peak, or the "Lotus Flower Peak." The name comes from a lotus-shaped rock that sits outside the Cuiyun Palace temple atop the peak. On our journey from South to West, we enjoyed the quiet solitude on the mountain, admiring the smell of fresh pine and waving to the occasional hiker passing by.

Once we got to the West peak, everyone seemed to come out of the woods... literally. Groups on groups of people were crowded in clumps, pushing and shoving and pointing. They all wanted the perfect photo, all at the same time. I couldn't help but wonder what the place was like during the "high" travel season if this was considered the "low" travel season.

Between the crowds and the millions of stairs we had already climbed, we knew it was time to rest and fuel up for our afternoon journey to the North peak. Along the trail, (what felt like) every 50 feet was either a restaurant or snack bar where you could purchase chips, fruits, drinks, and instant noodles (a hot commodity on the mountain). Everything is crazy expensive, though— especially for Chinese standards. I mean, just think about the people who have to haul all the food up the mountain every single day. To avoid the high prices, we brought our own instant noodles and fruit, which made for quite the satisfying lunch. I guess anything tastes good when you're outside hiking all day...

Our legs surely thanked us on the way to the North peak. The folks who decided to start at the North and make their way to the other peaks? Not so much. They were stuck with quite the uphill battle. The term "switchback" is surely given a whole new meaning while either ascending or descending to and from the North peak. 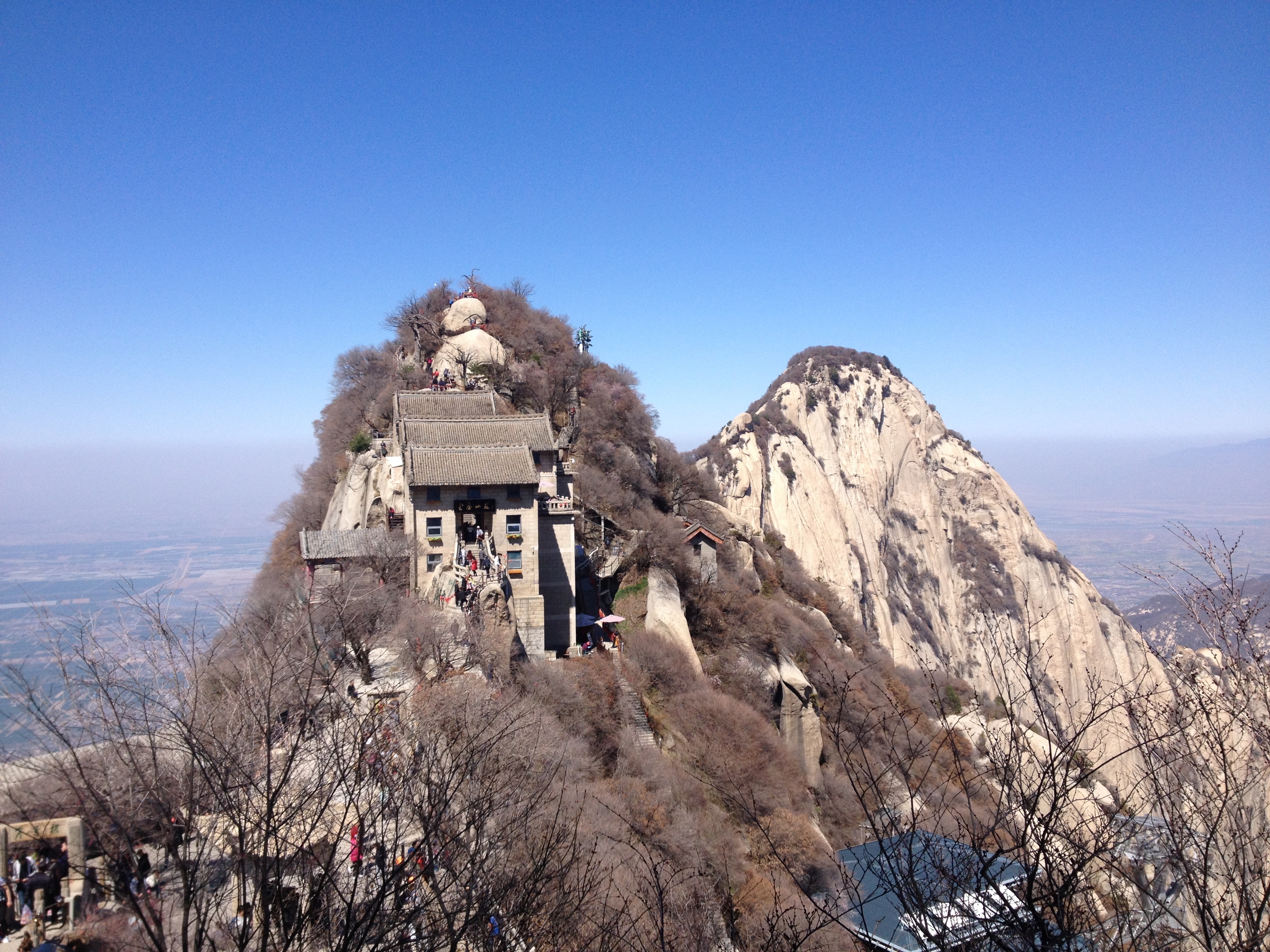 The North peak has been dubbed the "Cloud Terrace Peak" because of the precipitous cliffs that resemble a flat terrace (pictured). There are several small temples along the Northern peaks, allowing for a beautifully serene and meditative atmosphere. This was the last stop on our trip, so we spent a leisurely afternoon exploring the peaks and basking in the warm afternoon sun.

As 3 PM rolled around, it was time for us to head back down the mountain, rest our shaking legs, and finally eat some real food. We took the North peak cable car back down the 5,295 feet descent for yet another 120 yuan fee a head ($20 USD). We were surely content to have our feet on flat ground and only have to pay one more ticket fee of 20 yuan ($3 USD) to take the bus back to the welcome center downtown.

Aside from the overpriced fees, our trip to Mount Hua was just what we needed: an escape from the city life; an oasis in the mountains. And now? We can say we've walked the same path that many great Taoist emperors once did. Add that to the resume.

From HubSpot to China: What I Hope to Take With Me 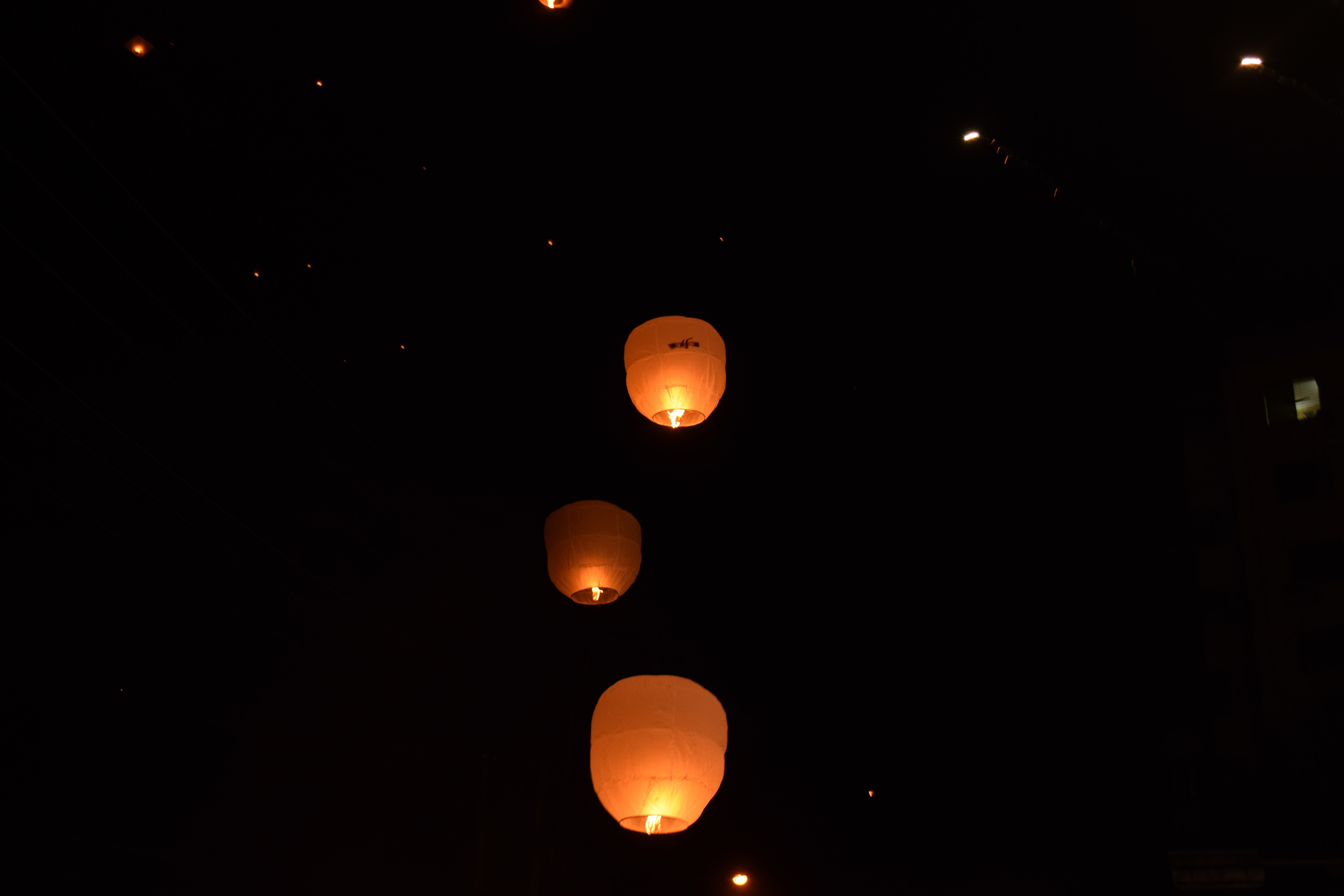 New Year's Eve is that one holiday everyone hypes up. You always want to plan the perfect night in the most perfect setting with your favorite people so you can ring in...