A Day Downtown in Xi'an

Walking around Xi’an, I often have to stop and think, “Am I in New York City?” Monstrously high buildings tower over me, flashy billboards line the horizon, and street vendors line up on nearly every corner, hoping to sell a cellphone case or a roasted sausage on a stick. Busses zoom by with little to no regard for pedestrians, cars weave from lane to lane, taxi drivers never seem to stop pressing on their horns. The smells of a city of 9 million contrast with the aromas of freshly steamed dumplings and spicy grilled meats— your nose is constantly flipping from misery to ecstasy, and back again.

Like NYC, Xi’an is bustling place— it’s full of life, and it never sleeps. Unlike NYC, Xi’an is thousands of years old, and is often dubbed the birthplace of Chinese civilization. After all, Xi’an (then Chang’an, meaning “Eternal Peace”) was once the capital for 10 ancient dynasties and numerous kingdoms. Without a doubt, a trip to Xi’an isn’t complete without visiting the many renowned historical sites. If you’re looking for an action-packed, culturally stimulating day in the city, read on.

Start your day off early with some zen at this Tibetan Buddhist temple. Nestled in the northwest corner of the city, the Lama Temple is a must-see. Before you walk into the temple, you can’t help but notice the colored Tibetan prayer flags above your head, blowing gently in the breeze. You’ll immediately feel relaxed and at ease here, away from the noisy streets and crowded tourist hotspots; in fact, it is one of the few places in the city where you can't hear the constant blaring of car horns.

To the left of the entrance is a small ticket window, where you’ll need to pay 20 CNY ($3 USD) to walk through. When you step into the temple's doorway, you’re greeted by two beautiful carvings: one on the wall in front of you of a pouncing tiger, the other at your feet of a regal dragon.

As you move through the temple, faint aromas of incense will fill your nose and flickering candles will shimmer before your eyes. You’ll find several halls in the center of the temple, as well as many flanking halls, wing-rooms, and cross-yards off to the sides. You can’t miss the first hall: the Devajara Hall. Inside, a glistening golden statue of Thousand-Hand Avalokitesvara sits atop a lotus throne. The sheer beauty and size of this statue is enough to take your breath away.

Another note-worthy hall is situated north of the Great Buddha statue. Inside, there are many cushion-topped benches and floor pillows to rest on. Beams of light shine on the handful of people inside as they read or meditate silently. It’s the perfect spot to spend the late morning reading your favorite book or simply enjoying the solitude. 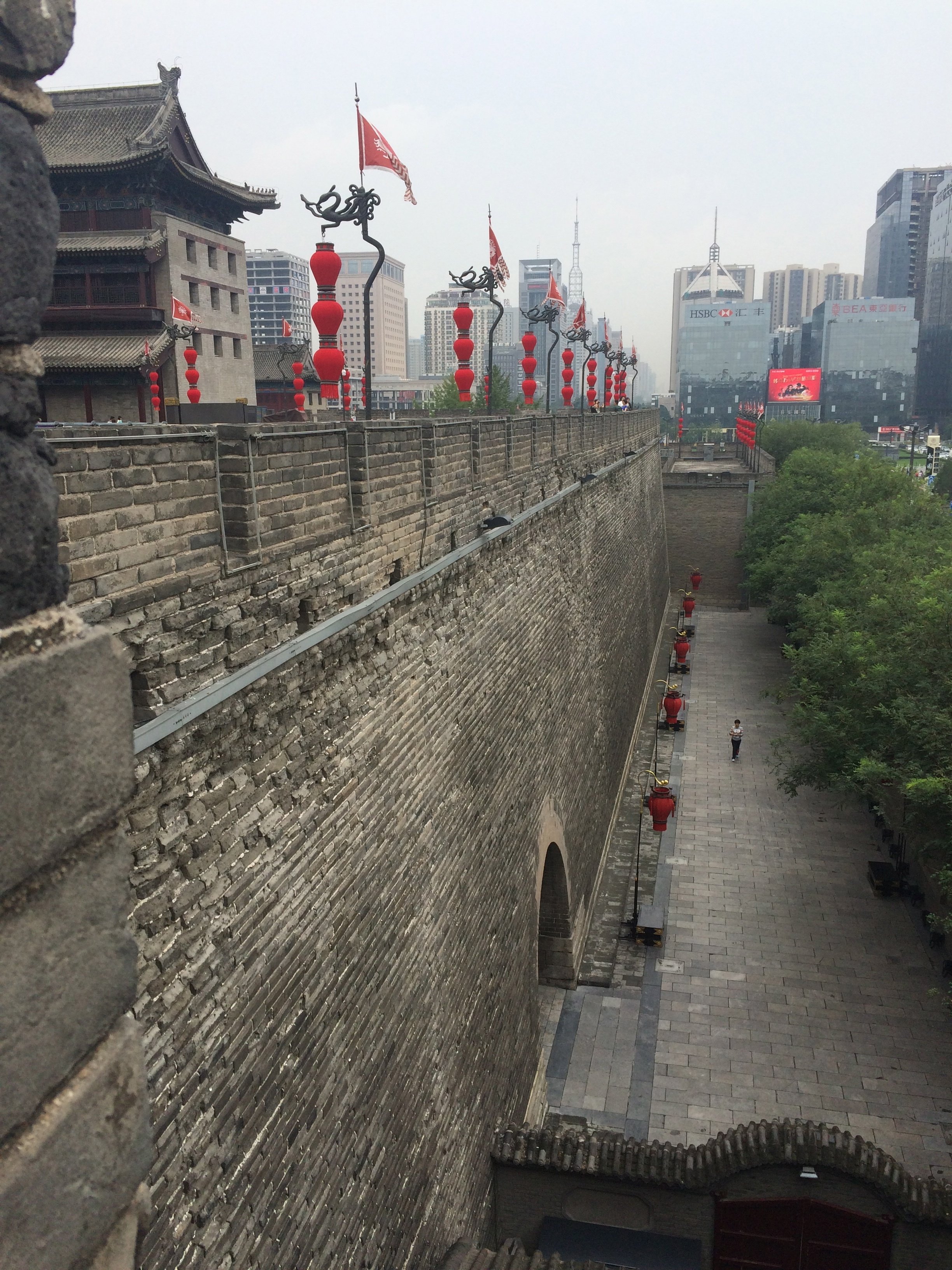 If you don’t agree that biking the most complete ancient city wall in China isn’t one of the coolest experiences you could have in Xi’an, you should hop on a plane and fly back home.

The wall was originally built during the Tang Dynasty (618-907), but was finalized during the Ming Dynasty (1368-1644) under the first emperor’s rule. The wall was intended as a defense system, protecting the locals inside the city from outside attackers. The layers of dirt that once formed the wall were no match for the advancing weapons, so it was later rebuilt with brick, and has since been restored three times.

Biking the wall is the best way to experience the wonder of the ancient city. There are a total of 18 gates, but not all are open to visitors. It’s recommended to ascend the wall at the South Gate because you can rent your bike once you’re on the wall. The entrance fee is 40 CNY ($6 USD). Once you enter, walk up the stairs to either side of you and find the bike rental shop on top of the wall. It’s only 20 CNY ($3 USD) for an hour and a half rental, but you’ll have to throw down 200 CNY ($30 USD) for a deposit. Totally worth it. 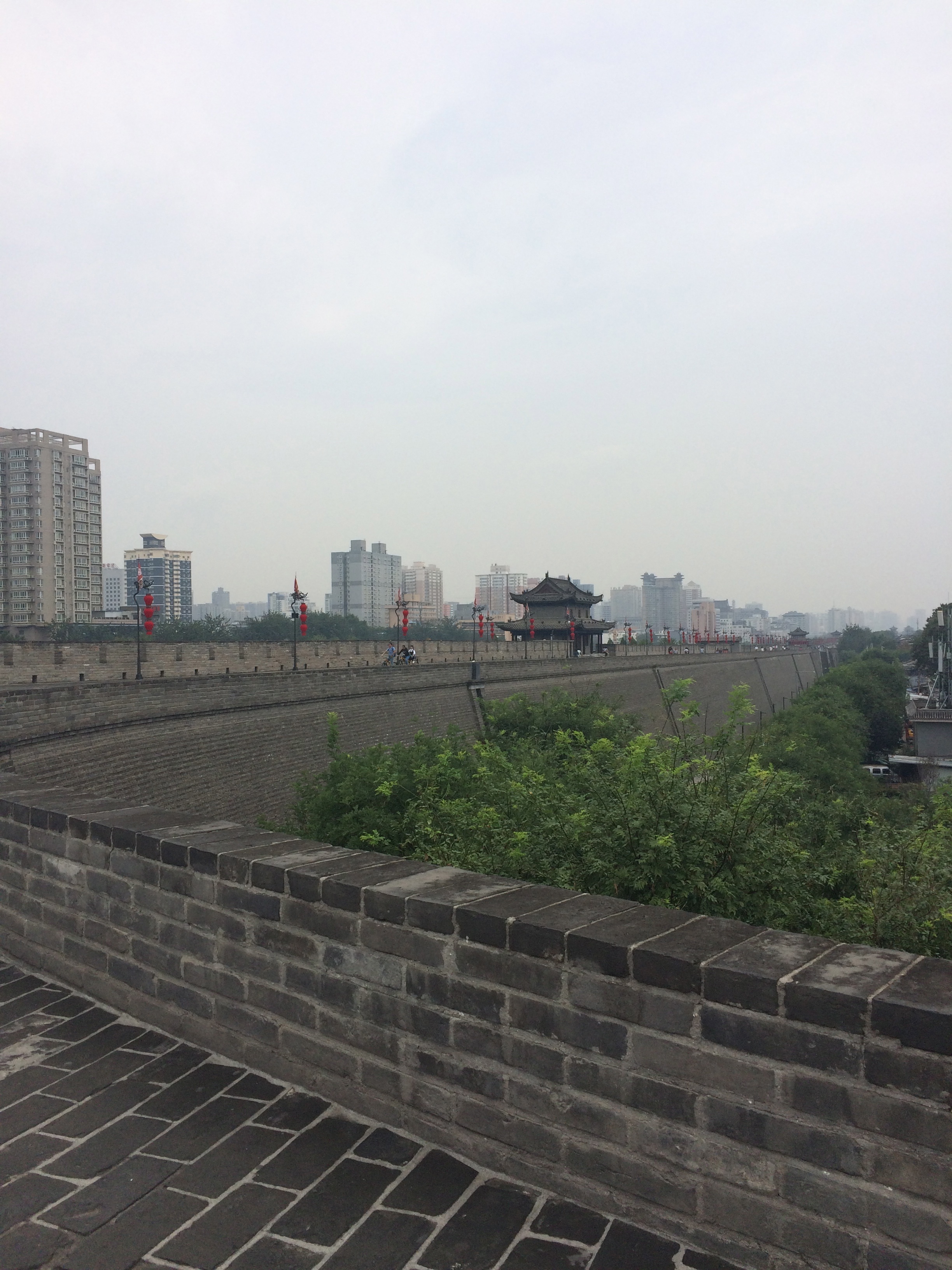 Once you start biking away from the busy gate, you’ll feel as though you have the entire wall to yourself. The route gets bumpy at times, but the sheer magnitude of the rooftop views and high-rise skylines make you forget about how sore your butt will be in the morning. Biking the city wall truly gives you the perfect perspective of Xi’an’s scale and historical significance.

After a leisurely 9 mile bike ride, replenish your fluids (and treat yourself) at Xi’an’s one-and-only craft brewery: Near Wall Bar. Located just 200 meters west of the South Gate on the inside of the city wall, Near Wall Bar is marked by a small, circular sign, lit up with a smiling Buddha on the front. Inside, the Asian decor reminds you you’re still in China, while the smokey, low-lit atmosphere transports you to Europe— an Asian-Belgian fusion. You can order burgers and other Western cuisine, but the highlight is, obviously, the beer. 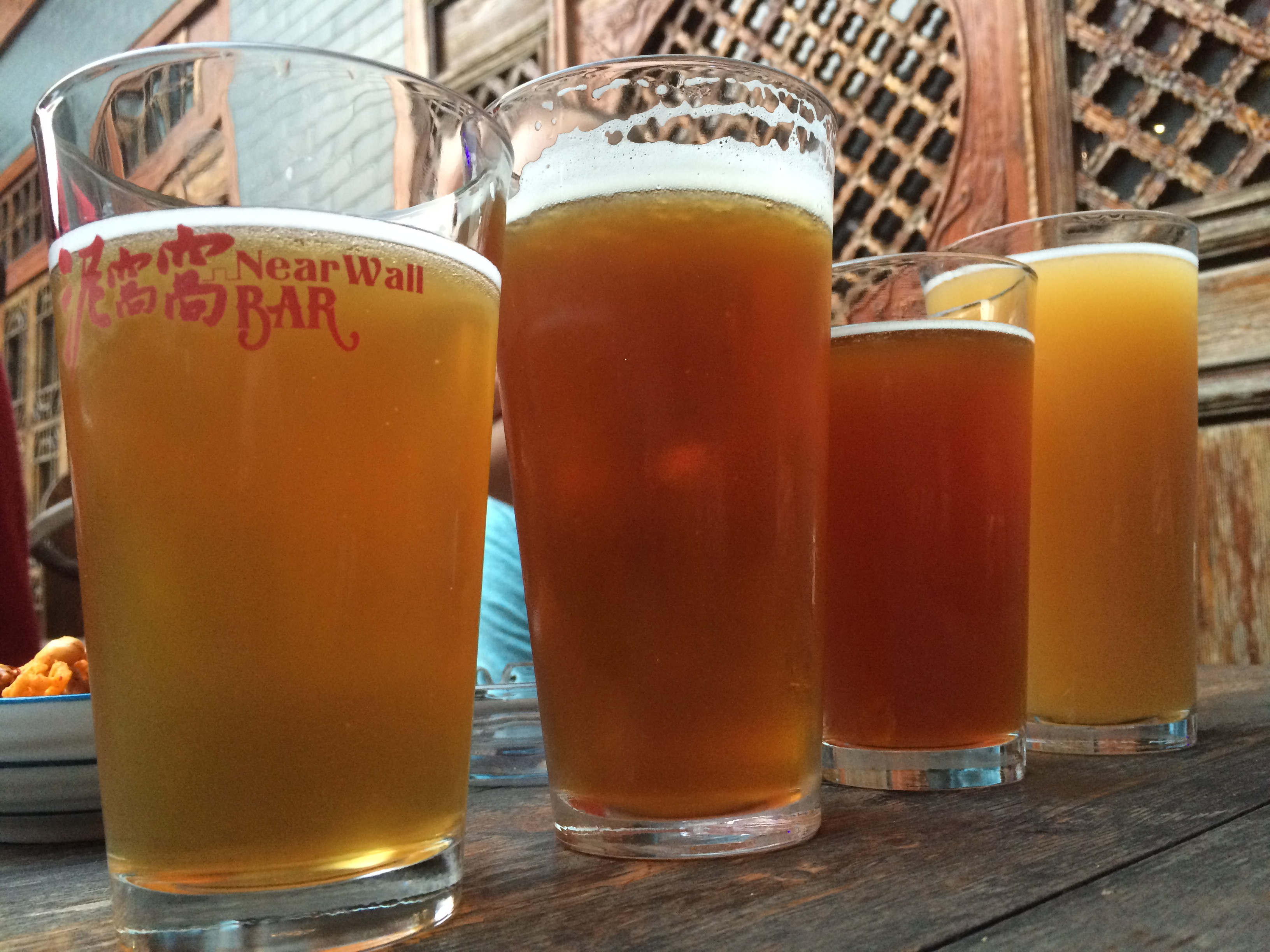 Justin, as an amateur brewer, was excited to find that not only was there a craft brewery in Xi’an, but that the beer was actually pretty good, too. He opted for the “Lab Lager,” a limited batch lager with deep amber coloring and a smooth finish. I went with the “Citrus IPA” which wasn’t as hoppy as I expected, but was still nice, refreshing, and lemony. Our friend and fellow teacher joined us, who’s originally from Seattle. She equally enjoyed her “Wit” beer. We sat together outside and spent a lot of time talking about East coast versus West coast brewing as the sun began to set over the city wall.

Whether you stop by the Muslim quarter for lunch or dinner (or both) it’s sure not to disappoint. The ancient Drum Tower (near the South Gate) marks the entrance to the winding and vibrant quarter, which covers several blocks.

The earlier you can get here the better, as far as crowds go. The later in the evening it gets (around 7 PM onward) the more the tourists (both Western and Chinese) flock to the area. As you walk along the narrow streets, imagine this: men in small white hats spicing fresh mutton meat over an open grill, women in sparkling head scarves squeezing pomegranate seeds for fresh juice, children in t-shirts and shorts running through their family’s jewelry shop, laughing wildly. The Muslim quarter instantly feels like warm, inviting community as soon as you step inside. 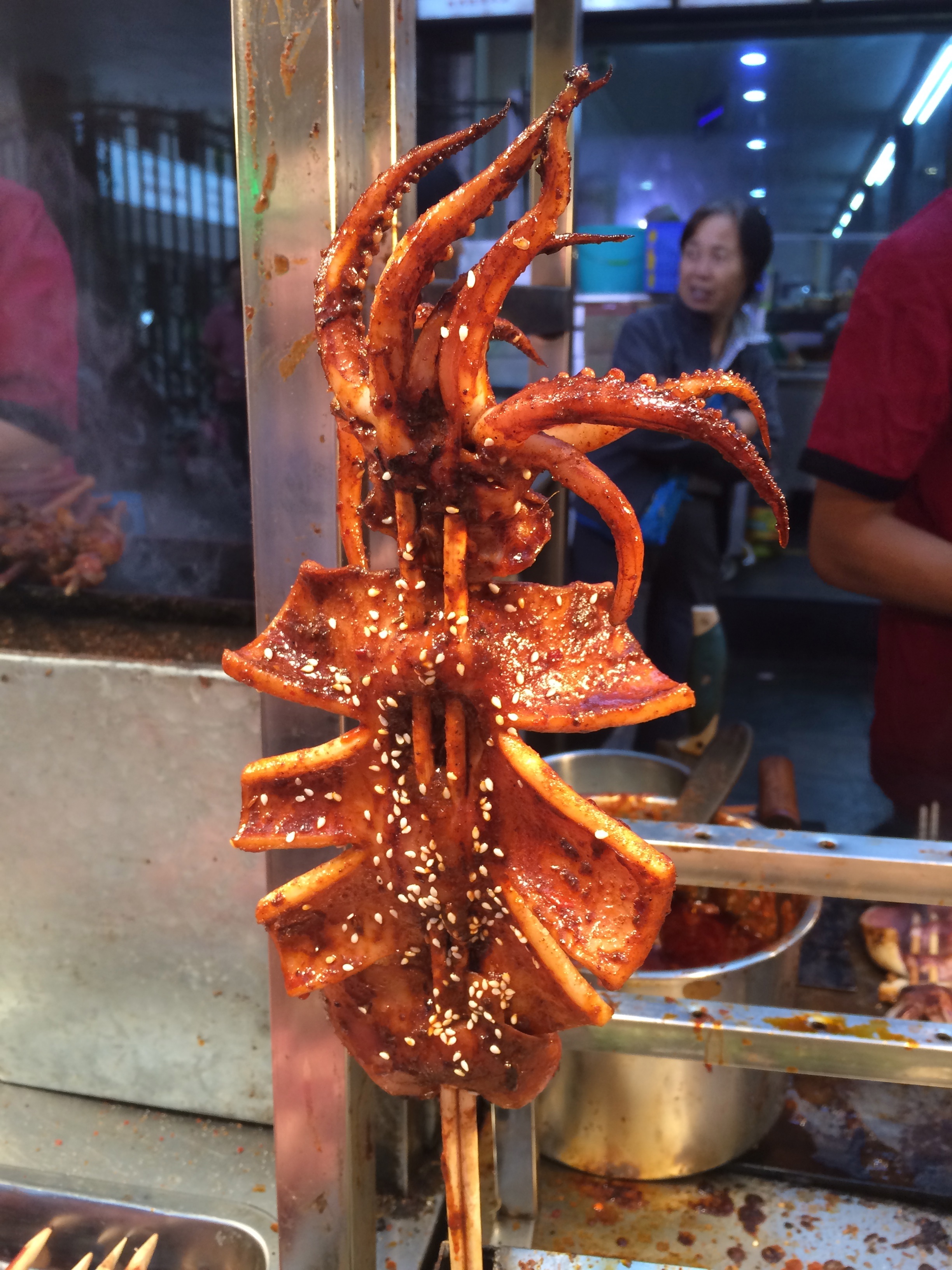 Now, aside from the sights, let’s be real— you came here for the food. Let’s talk grub. Like I mentioned in one of my older posts, you can never go wrong with yangrou paomo (bread and mutton stew), tangbao (soup dumplings), liangpi (cold noodles), and/or chuan’er (meat kabobs). We’ve seen (but haven’t tried) the street carts with fried squid and crab. The aroma of the fried seafood alone is enough to tempt you to try it.

There are also many shops that sell homemade candy and granola snacks— a very popular stop along the Muslim quarter. Even if you opt out of buying anything, watching the men break up the sticky nut mixtures with wooden hammers and twist the sugar to form their homemade candy is sheer joy.

A Day for the Books

Feel true inner peace at the Guangren Lama Temple. Experience ancient Chinese culture biking the city wall. Relax with a quality brew at Xi’an’s Near Wall Bar. Sample some of the best street food in the Muslim quarter. What a day!

Enjoy the best Xi’an has to offer with this itinerary and you’ll head home for the day feeling enlightened, cultured, and delightfully stuffed.